Putting the Art in Smart 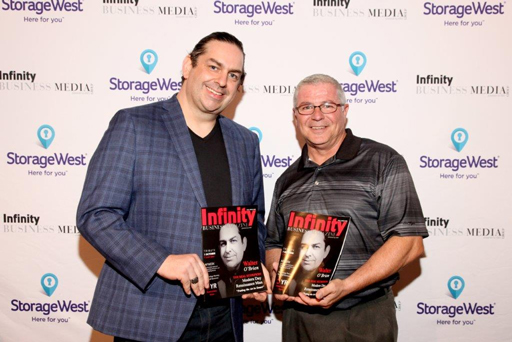 The event was sponsored by Microsoft, Storage West and Chapman Las Vegas. The host of the evening Tony Ferriera, founder and CEO of Infinity Business Media Group, explained, “We host this event yearly as a release party for our anniversary magazine issue, but it is also a way to help smaller businesses gain the additional exposure they might not otherwise have. With the continued and generous support of our sponsors, it allows us to continue the tradition. However, this year was especially noteworthy. Not only was it our five-year anniversary issue, but we had the renowned Walter O’Brien on our cover, along with a special guest appearance. We will have to work extra hard on future events as It will be difficult to top this year due to the excitement and buzz Walter’s appearance created.”

As Tony Ferriera previously stated, the highlight of the evening was a special guest appearance from Walter O’Brien (aka "Scorpion"), who is the founder of Scorpion Computer Services Inc., a global think tank for hire that provides “intelligence on demand” as a concierge service for any funded need. Scorpion has gathered together the very best talent with deep knowledge in diverse areas of expertise to solve the most difficult client problems that may be too vague or abstract to outsource to traditional firms. 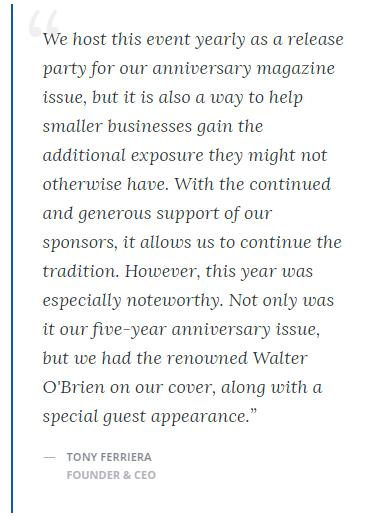 Walter is also the executive producer of the hit CBS-TV drama "Scorpion," inspired by his life with over 26 million viewers in the U.S. and which airs in 188 countries to up to a billion viewers per week. Walter who was diagnosed as a high-IQ child prodigy was certified by U.S. Department of Homeland Security as being of National Interest to the U.S. and granted him an Extraordinary Abilities EB1-1 Visa.

Walter created over 150 unique technology inventions, is an Irish national coding champion and competed in the Olympics in informatics. His company Scorpion Computer Services has now won “most innovative company” and “most innovative product” awards. Walter has personally applied artificial intelligence to the Navy's command and control system Agile, as well as Aegis, the Ballistic Missile Defense System, and recently deployed his AI engine ScenGen to the U.S. Army's drone fleet.

Walter is the youngest recipient of unite4:humanity’s Celebrity ICON Humanitarian Lifetime Achievement award and has received a commendation from the Los Angeles Mayor's office for his contributions to world peace. Walter was the keynote speaker at MENSA's annual gathering, has won C-Suite Quarterly's Visionary award and provided the seed funding for TaxiWatch, a suicide prevention program that has saved over 130 lives to date.

Wherever Walter O’Brien goes, his reputation usually proceeds him and this event was no different. As a man known for his incredible talent and intelligence, one would expect to be intimidated not only by his 197 IQ but his large stature and confidence. “However, that was not the case,” states Tony Ferriera. “While he is a man with a formidable presence, he was very welcoming to everyone at the event and invited guests to come to speak with him personally. Guests spent the rest of the evening engaging with Walter O’Brien on a business and personal level. I don’t believe there was one person in the room who didn’t at least want a photo with him.”

When asked why he chose Walter O’Brien as the cover, Tony responded, “Well I have to give credit for that decision to Heather Bednarczyk. Heather is an internationally known purveyor of fine art and when she approached me with the idea of writing an article combining art and business and her subject was Walter O’Brien, I was intrigued. She explained her vision and we were immediately on board.”

To read or order a hard copy of the latest issue of Infinity Business Magazine featuring Walter O’Brien, go to www.inblv.com or www.scorpioncomputerservices.com.