In his speech, Walter O'Brien discussed problems and solutions to some of the world's biggest cybersecurity issues, touching on ransomware, aging government computer infrastructure and the perils of inaction. Regarding EmTech Asia, O'Brien said, "EmTech Asia brings together some of the brightest minds in technology and computer security. It was an honor to keynote the conference in Singapore and contribute to furthering several global initiatives in cybersecurity." 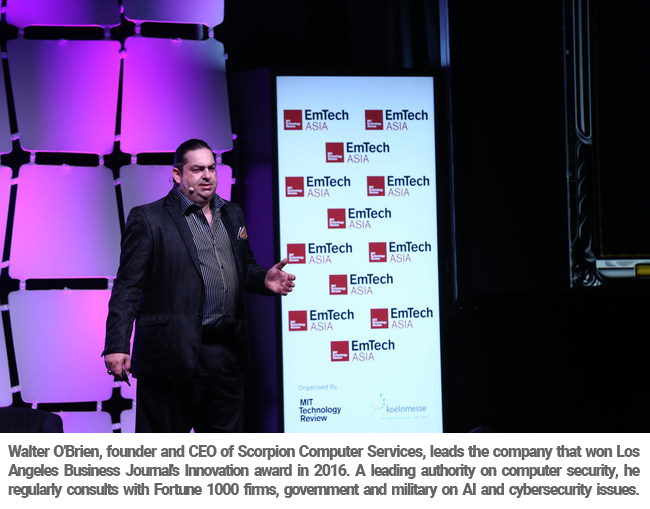 Regarding the award Samira Kazemeni personally introduced Walter by saying, "years ago the self made billionaire donated his time for free to give her honest business and life advice that changed her life and business significantly for the better. Walter O'Brien exemplifies the spirit of doing good in the world, with a recent award from the defense industry for saving countless lives. He's also among the most generous with his time promoting STEM subjects and computer science while teaching kids that 'being smart is cool.'"

Walter O'Brien's firm, Scorpion Computer Services, Inc., is the winner of Los Angeles Business Journal's Patrick Soon-Shiong Innovation award for the deployment of ScenGen, the artificial-intelligence engine and for its work with the military on defense infrastructure. His company works with Fortune 1000 firms to test, implement and provide quality assurance on software and hardware security.'"


Walter O'Brien is the founder and CEO of Scorpion Computer Services, Inc., and CEO of Scorpion Studios. He is the Executive Producer and the inspiration behind the hit CBS television drama, Scorpion, with over 26 million viewers in 180 countries. The U.S. Department of Homeland Security has certified Walter O'Brien as being a person of national interest to the United States and granted him an Extraordinary Ability EB 1-1 Visa. He has worked with the U.S. Department of Homeland Security, plus Navy and Air Force systems to deploy artificial intelligence that protects American military personnel. In addition, he has worked with multiple Fortune 500 companies including the world's largest mutual fund, Fujitsu, Trados, Oracle Corporation, Baltimore Technologies and Critical Path. O'Brien serves as chairman or board member for Strike Force Solutions, Talentorum Alliance, Houston Technology Center and Lawloop.

O'Brien regularly donates his time to charities and the community in general, to encourage all generations to celebrate intelligence. O'Brien provided the seed funding for TaxiWatch Kilkenny, a suicide prevention program that has saved 100 lives since its inception in 2015. Also in 2015 O'Brien contributed to the next XPRIZE selection as part of XPRIZE Visioneering.


EmTech Asia is where technology, business, and culture converge. It is the showcase for emerging technologies with the greatest potential to change our lives. It is an access point to the most innovative people and companies in the world. Most of all, it is a place of inspiration — an opportunity to glimpse the future and begin to understand the technologies that matter and how they will change the face of business and drive the new global economy. www.emtechasia.com