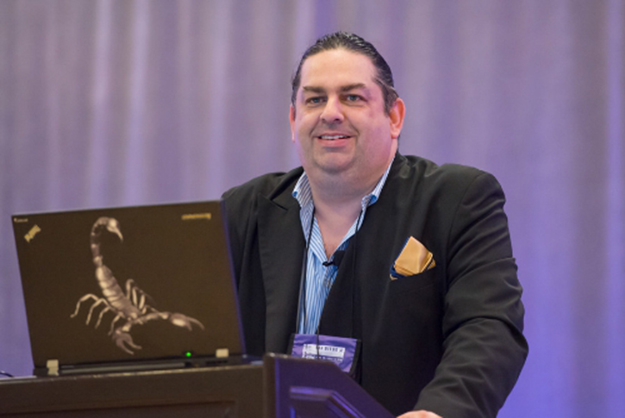 O'Brien's speech connected with an audience of people who scored in the top 2% of the general population on an IQ test. The audience related to O'Brien as he recalled his earlier years when he was bullied for being different. In his presentation, O'Brien showed that Emotional Quotient, or EQ, was just as important--if not more important--than IQ. "It was a steep learning curve," O'Brien said of his journey that would later inspire CBS's number one television drama, Scorpion, which is based off O'Brien's earlier life.

A problem-solving expert and the CEO and founder of one of the world's most advanced consulting firms Walter O'Brien has worked with governments, international heads of state, the United States Navy, Air Force and Fortune 500 firms to design, implement and maintain computer security and information-technology systems. His firm helps ordinary people do extraordinary things through Concierge Up, a "think tank for hire" offered through Scorpion Computer Services.

2016 Annual Gathering Chairperson, LaRae Bakerink said, "Mr. O'Brien struck a note with our members. We appreciated the education he went through for EQ."

Walter O'Brien said of MENSA's annual gathering that, "I felt right at home with people who can relate to my story personally. It was an honor to meet and speak with many of the members and hear about their journeys and opportunities."


Walter O'Brien is the founder and CEO of Scorpion Computer Services, Inc., and CEO of Scorpion Studios. He is the Executive Producer and the inspiration behind the hit CBS television drama, Scorpion, with over 26 million viewers. The U.S. Department of Homeland Security has certified Walter O'Brien as being a person of national interest to the United States and granted him an Extraordinary Ability EB 1-1 Visa. He has worked with the U.S. Department of Homeland Security, plus Navy and Air Force systems to deploy artificial intelligence that protects American military personnel. In addition he has worked with multiple Fortune 500 companies including the world's largest mutual fund, Fujitsu, Trados, Oracle Corporation, Baltimore Technologies and Critical Path. O'Brien serves as chairman or board member for Strike Force Solutions, Talentorum, Alliance Houston Technology Center and Lawloop.


"American Mensa is an organization open to anyone who scores in the top 2 percent on an accepted, standardized intelligence test. Mensa has more than 56,000 members in the United States and more than 110,000 members globally. Mensa strives to recognize and support intelligent people and their endeavors. For more information about Mensa, visit americanmensa.org/join or call (800) 66-MENSA."