Walter O'Brien: Helping the world one problem at a time

Have a problem? No worries, tech prodigy Walter O'Brien and his associates have the solution

Pick a problem, any problem. Imagine you could hire one of the smartest people in the world to fix it? That dream has become a reality thanks to tech prodigy Walter O'Brien and his team of skilled problem solvers. Whether its personal, business or technical - O'Brien and his associates have the solution. 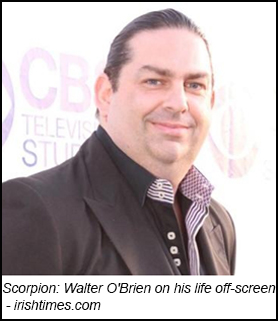 Big fish in a little pond

As an exceptionally smart young boy in rural Ireland, O'Brien often felt like an outcast. Naturally, his thirst for knowledge was not easily satisfied in a town surrounded by farms.

"Growing up in a small town, I became bored." Walter said. "Most people were either interested in farming or sports, and I have always been more left brained and logical, which is why I was so interested in computers."

The more he learned, the better got. It wasn't long before O'Brien became the go-to-guy to solve local tech problems, and Scorpion Computer Services was created.

"As more people started using computers, they needed tech support." Walter explained. "Before I knew it, kids were asking me to fix their floppy disks and local companies were paying me to help with various computer problems."

As O'Brien's business grew, so did the variety of problems his team was presented with. He found that his agile approach worked not only for technology and business, but for life as well. In time, Fortune 500 companies and other high profile clients sought to take advantage of Scorpion's unique strategy and skilled team.

"We have some of the most intelligent individuals working at our company, so why not have this kind of brainpower working on their startups or life problems on a week to week basis?" Walter asked. "People rent other products, why not rent extra brain capacity?"

He also saw Scorpion Computer Services as a way to prove that "smart is cool," and made it a personal responsibility to recruit others who have ever felt excluded like he had. As Walter said, it became sort of an "orphanage for smart people."

However, O'Brien knew he was a big fish in a small pond. At age 21, he made his way over to the United States on an Extraordinary Ability EB 1-1 Visa in order to expand his business and pursue his passion for technology and problem solving.

"All of the technology was coming out of Silicon Valley, and by the time it reached Ireland it was about 4 years old." O'Brien said. "I knew that if I wanted get into the cutting edge technology, I needed to go to the source."

Scorpion Computer Services began working to protect military agencies from security threats, and is now an invaluable asset to homeland security. In fact, the Fort Wayne Base Community Council and Northeast Indiana Defense Industry Association recognized O'Brien and his team last year for their exceptional technological contributions, which saved over 400 soldiers in Afghanistan.

However, when I asked O'Brien about his greatest achievement, he claims that landing a hit television series called Scorpion on #CBS, based on his life and business, may top the list.

"In terms of the number of people it [the television series] will inspire; this may become my greatest impact on the world." O'Brien claimed.

"Watching television characters like MacGyver and other protagonists inspired me to keep going," he recalled. "I hope Scorpion will do the same by letting others know that there is a place for everyone in the world."

Scorpion now has over 26 million views and has been renewed for a third season, which premieres in early October.