SAN DIEGO - Walter O'Brien may be best known today as the creator and executive producer of "Scorpion," the CBS TV drama that debuted in September 2014 and has become a massive hit.

"We're now on season three of the Number 1 show on the air," O'Brien said, while also praising the lead performance by Elyes Gabel, who plays an eccentric genius named . Walter O'Brien.

"If you're ever going to do a hit TV show," O'Brien said, "get someone way handsomer than you."

"Scorpion" follows O'Brien, the leader of a group of brilliant misfits dubbed Scorpion who make up Homeland Security's new think tank. They work to defend people against the high-tech threats of the computer age. 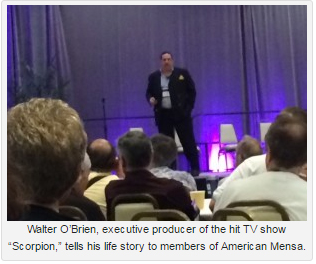 What a lot of the show's fans may not know is the story that inspired it all - O'Brien's life history, as a child prodigy with a very high I.Q., who went on to become the founder and CEO of Scorpion Computer Services.

On Thursday, O'Brien brought his story to another group of very high I.Q. folks: the members of American Mensa, the organization for people in the top 1 percentile of high intelligence. Mensa is holding its 2016 Annual Gathering this week at the Town & Country Inn in San Diego, where O'Brien told a large and enthusiastic crowd about how he went from smart but lonely child playing with rubiks cubes to the producer of a hit TV series.

"It's been a slow evolution," O'Brien said, "but it's an evolution that can happen to any one of you."

It was clear at a very early age, O'Brien noted, that he was a bit different from the other kids.

He was right: he found himself spending more time locked in front of a computer than playing with other kids. He also proved to have exceptional skills: he hacked into NASA at age 13, and into the Bank of England by age 16.

As an adult, that led him to start Scorpion Computer Services, which not only become a company that helped individuals, businesses and governments cope with computer problems, but also become a gathering place for people very much like O'Brien himself.

"When I started my company very young, I ended up hiring all my young friends, who were prodigies," he said. "It was kind of like a geek squad - we fixed any computer problems."

But they quickly ran into problems, O'Brien said, when he figured out that high intelligence does not always equal strong social skills.

"I realized when I put two of my protegees on a project, they'd kill one another while offending the customer," he said. "That's when I learned that the higher the I.Q., the lower the emotional intelligence. When your internal sound board is broken and you don't know it, you end up insulting people."

So he hired people with strong social skills to act as nannies to his computer geeks, monitoring their calls and offering advice on how they should address the clients in the future. That seemed to help, he said.

"My company grew. We started solving more and more people's problems," he said. "We began taking on big clients and solving bigger problems."

Scorpion, he said, had evolved into "an orphanage for smart people."

That inspired O'Brien to look even higher, and form a new company called ConciergeUp. People could present his staff with any problem, any challenge, and they would find a way to solve it. They helped a couple whose daughter, a journalist, had been arrested in Libya while covering the civil unrest there. Her trial was not scheduled to start for two years, but O'Brien noted that his team had her back home in the United States within 48 hours.

They helped a couple prevent their son from marrying a Ukrainian woman who they believed was a gold-digger out to get his money. "We get requests like, 'I want to be happy, I want to be in love,' " O'Brien said. "Soon I had a problem - too many requests, not enough geniuses."

His next great challenge came from a request to develop a hit TV show. O'Brien decided to turn his unique successes into a television show based on his team.

"the characters on the show are based on people who have worked for me from the very beginning," O'Brien said. "That show's message is there's a place for everyone who doesn't fit in, and there's a solution to every problem."

Michael Freeman is an Orlando journalist, playwright and author of the book "Bloody Rabbit". Contact him at Freelineorlando@gmail.com..