Inspiration for CBS television show speaks to over 1200 in packed auditorium at Code Wars in Houston, Texas 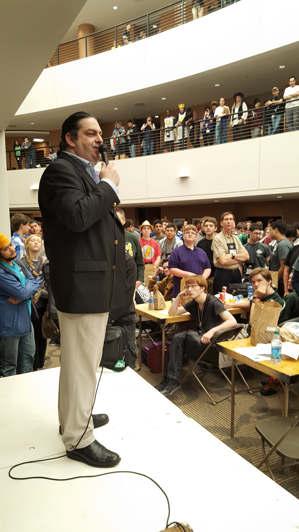 O'Brien delivered four speeches, including the keynote address to a packed, three-story auditorium on Hewlett Packard's campus. Scott Harsany, Director of R&D at Hewlett-Packard Enterprise said of O'Brien's speeches: "Walter had everyone on the edge of their seats. He is an inspiration for the younger generations and has shown the generosity to share and give back to Houston."

In the early 1990s, O'Brien led the Irish team in the Information Olympics and led in the Wisconsin International Problem Solving competition.

Said Walter O'Brien of the event: "It's an honor for me to contribute to Houston's younger generations and show them that 'smart is cool.'" In December 2015, O'Brien was unanimously voted in as a board member of non-profit Houston Technology Center, named by Forbes as one of "Ten Technology Incubators Changing the World."

After the Code Wars event, O'Brien was spotted at the Houston Livestock Show and Rodeo.

Walter O'Brien is the CEO of Scorpion Computer Services Inc., and CEO of Scorpion Studios. O'Brien regularly donates his time to helping charities and the community in general to encourage new generations to celebrate intelligence. He is a frequent media commentator, public speaker and radio show guest. O'Brien provided the seed funding for TaxiWatch Kilkenny, a suicide prevention program that has saved 75 lives since its inception in 2015. Also in 2015 O'Brien contributed to the next XPRIZE selection as part of XPRIZE Visioneering.