LOS ANGELES, CA - 12/11/2015 - Walter O'Brien, Executive Producer and the inspiration behind the hit CBS show, Scorpion, and founder and CEO of international consulting firm, Scorpion Computer Services, has joined the board of non-profit technology and entrepreneurship incubator, Houston Technology Center. 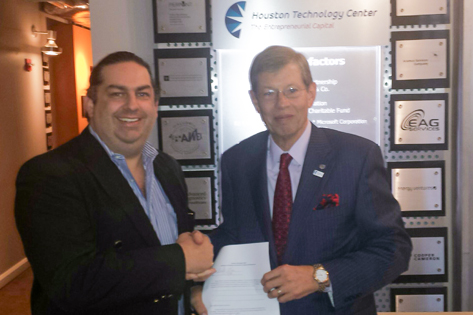 Said Walter Ulrich, CEO, Houston Technology Center: "Walter O'Brien's addition to our board of directors adds distinctive expertise and deepens our leadership bench. Walter is a world-renowned cybersecurity expert and technologist. His inventions, including ScenGen, have had a number of commercial applications that will further inspire the Houston innovation."

After a unanimous vote to add Walter to its board of directors, O'Brien said, "I look forward to making tangible and inspirational contributions to the Houston Technology Center's initiatives. HTC is an engine behind Houston's and Texas' continued growth."

An EB 1-1 visa holder--reserved for "persons of national interest" according to the U.S. Government--O'Brien has come off a year of multiple awards and business successes, including a nomination from the City of Los Angeles mayor's office for Irishman of the Year. He was also honored by the mayor of Kilkenny, Ireland. Earlier this year, O'Brien spun off Scorpion Studios to advise major motion pictures studios on technology in film, with clients that include Columbia Pictures and its upcoming Spiderman: Venom film. He is also the executive producer of the hit television show, , now in its second season


Walter O'Brien is the CEO of Scorpion Computer Services, CEO of Scorpion Studios, the founder of ConciergeUp.com, and the Executive Producer of Scorpion, the hit CBS-TV drama with over 26 million television viewers that is inspired by O'Brien's life. The U.S. Department of Homeland Security has certified Walter O'Brien as being a person of national interest to the United States and granted him an Extraordinary Ability EB 1-1 Visa. He has worked with the U.S. Department of Homeland Security, plus Navy and Air Force systems to employ his artificial intelligence systems to protect American military personnel. In addition, he has worked with multiple Fortune 500 companies including the world's largest mutual fund, Fujitsu, Trados, Oracle Corporation, Baltimore Technologies, and Critical Path. O'Brien serves as chairman or board member for Strike Force Solutions, Talentorum Alliance, and Lawloop.


Named by Forbes' as one of "Ten Technology Incubators Changing the World," and as one of "Twelve Business Incubators Changing the World," the Houston Technology Center is the largest technology business incubator and accelerator in Texas, advancing the commercialization of emerging technology companies in the greater Houston area. HTC serves as the nexus of new ideas, technological innovation, and entrepreneurship. Each day, the staff and partners of the Houston Technology Center work closely with entrepreneurs and startup companies providing them with in-depth strategic and tactical business guidance, fundraising advice, and connecting them to opportunities, allies, and capital. As a catalyst for change, economic growth and development, HTC's focus is to assist in the acceleration and commercialization of emerging technology companies. Each company is treated individually according to their position in the Acceleration Pathway and their unique needs. As a 501(c)(3) nonprofit organization, HTC assists Houston-based entrepreneurs within several key sectors: energy, information technology, life sciences, nanotechnology, and NASA/aerospace.